A Cellulite Treatment That Works

Cellulite is one of the most common complaints we get about every year – most of them from women. The lumpy, bumpy appearance of the skin after years of “life” isn’t something that sparks a lot of joy for people.

For most women who talk to Dr. Jaffer at Heights Laser Centre about what he can do to get rid of their unsightly cottage cheese thighs, getting back to the smooth skin of their youth is mostly about improving their self-confidence. At Heights Laser Centre, we can perform cellulite reduction to restore your confidence and help you be more comfortable in your own skin.

Luckily, you don’t have to live with cellulite forever. VelaShape II™ is a unique, non-invasive solution for the treatment of cellulite.

We Treat You Right

With over 10 years of experience serving the men and women of Vancouver with non-invasive, anti-aging treatments, we have become one of the top medical spas in the area. And because we care about your comfort, we have developed our entire practice to be a place where you can enjoy a relaxing and welcoming environment. We consider it a privilege to serve you, providing amazing results for more than a decade.

We Made Sure Our Cellulite Treatment Works

Cellulite is extremely difficult to treat. That's why there are so many cellulite treatment options available on the market today. But how do you know which one actually works? Our doctors and staff have personally tried out our cellulite treatment technology to make sure it lives up to its claims, and it does!

We are a board certified physician-led medical spa that has been accredited by the Better Business Bureau since 2009. We have been granted an A+ rating for our excellent track record in patient service and treatment. This allows you to have unparalleled confidence in the quality and safety of the care you will receive.

What is VelaShape II™?

VelaShape II™ is a unique technology that combines infrared light, bi-polar radio frequency energy and vacuum. It causes a deep heating of fat cells, and their adjacent connective tissue and underlying dermal collagen fibers. With Velashape II™, blood circulation and lymphatic drainage is enhanced over a series of treatments, which results in smoother, tighter skin. What this means is that VelaShape II™ stimulates the production of new and better collagen and elastin, which results in:

The Velashape™ Journey to a More Sculpted You

Our medical spa designed to provide comfort and relaxation for each patient who walks through the door. From the first staff member you encounter to your final appointment with Dr. Jaffer or his laser technicians, every team member has your best interest and happiness in mind, which shows that client satisfaction is their top priority.

When You Visit Our Medical Spa

During your initial consultation, you will have all the time you need to ask every question you have about your desired procedure and the cellulite treatment we offer. You will also be able to fully explain your problem areas and what your desired results are. Because we believe in tailoring every treatment plan to reflect the specific needs of our patients, Dr. Jaffer will provide you with a solution for your cellulite reduction before you leave your private consultation.

We take an individualized approach with each of our patients, providing you with a treatment plan based on your desired results, medical history, and skin type to help get you the final look you want. It's all about helping you!

Your trouble spots will be carefully examined to determine if you will be able to achieve the results you want through non-surgical treatments. Cellulite reduction can be used on the following areas:

If it is determined that your cellulite is too severe to benefit from cellulite reduction, you may be recommended alternative treatments. This may sound surprising, but the goal is to help you get the body shape and results they want, not perform ineffective procedures.

IS VELASHAPE II™ RIGHT FOR YOU?

When you come in for your first cellulite reduction treatment, a member of Dr. Jaffer’s team will take photos of the areas of your body to be treated. These photos will be used as a baseline to compare your final results once you have completed your treatment sessions.

VelaShape II™ uses a combination of infrared light, bi-polar radio frequency energy, and vacuum to reduce or eliminate the appearance of cellulite for men and women. Through this combination of treatments, fat cells become deeply heated. This causes the patient’s existing collagen to grow and strengthen and breaks down the fibrous bands that compartmentalize the fat just under the skin. Patients are left with beautiful skin that has improved laxity and volume.

VelaShape II ® is used on several areas of the body and can be used independently or combined with another cosmetic treatment to increase cellulite reduction. For best results, Dr. Jaffer usually recommends his Vancouver patients undergo six cellulite reduction treatments to get the most out of VelaShape II™.

SEE MORE PHOTOS IN OUR GALLERY

Nobody likes the cottage cheese-like appearance of cellulite under their skin. This dimply, lumpy skin appearance, which is more common in females, and affects between 80% to 90% of women, is believed to be caused by the interaction between the connective tissue that lies just beneath the surface of the skin, and the layer of fat that you have, which is just below it. While cellulite most commonly appears on the buttocks, it can also show up on your thighs and abdomen, making you uncomfortable in certain clothing or bathing suits.

Cellulite is a common condition that affects millions of people every year. It can make it unpleasant to wear revealing clothing and can give the impression that you are unhealthy or overweight.

The condition is linked to a number of factors, such as hormone levels, heredity and even skin laxity. There is little that dieting or exercise can do, since it is a condition relating to the quality of skin itself.

Ask an expert for the right answers.

"I found the treatment to be quite effective. I noticed a difference after about 5 treatments, and most noticeably after 6. Larea was fantastic to work with. Very professional and always has your comfort in mind."

"I love Anna, she is caring and entertaining during the procedure to take my mind off the discomfort. Also, she was honest about my results which both her and I were happy with."

"Treatment was fantastic! It has made such a difference with regard to my confidence in wearing shorts. Would definitely do other areas."

For most patients, cellulite reduction treatments using this technology is a pain-free experience, but most notice a slight redness at the site of the treatment. Not to worry – this redness will subside within a few hours.

Cellulite reduction treatments are pain-free, and most of our patients consider it to be a pleasant experience. For your added comfort, each patient enjoys a private room. You can even spend time reading or checking social media while our team performs your procedure. For some, it’s the perfect time for a cat nap! Cellulite reduction with VelaShape II™ is THAT easy!

If less cellulite and a better-contoured body – all via a non-invasive procedure that you can have done on an outpatient basis and then immediately return to your daily routine – sounds like an excellent way to target your problem areas, then we want to hear from you. Dr. Jaffer and our dedicated team would love to help you achieve your body goals. 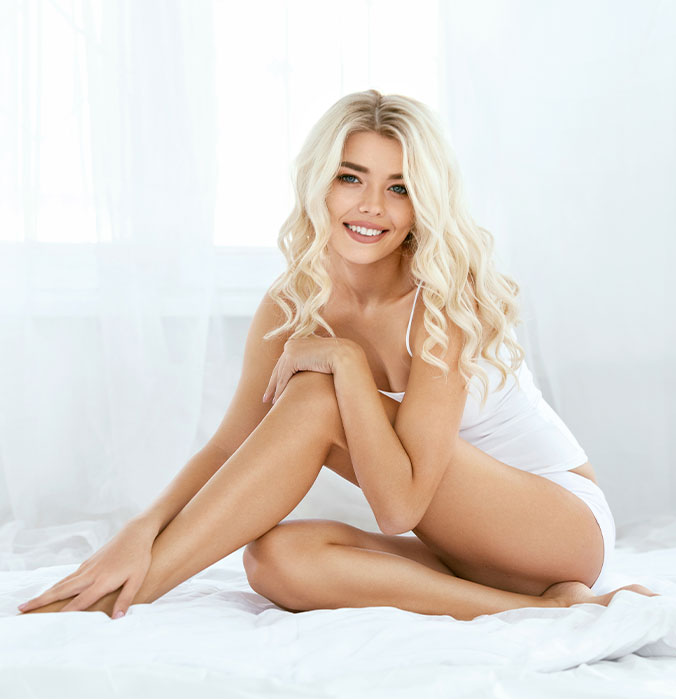 Become the Best Version of Yourself.
Book Your FREE Consultation Now.

Like our patients, you'll also appreciate our welcoming environment and treatment results provided by our dedicated and talented team.

Book your FREE consultation by filling out this form.